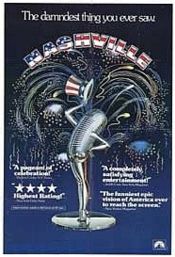 Movie director Robert Altman was not a Tennessean, but he had a profound effect on Nashville with his 1975 film bearing the name of Tennessee’s capital city. Nashville was endlessly discussed by film and social critics , while residents of the city–constantly testing the air to see if they were being mocked–tentatively enjoyed the attention.

Much effort was spent figuring out who was portaying whom. Henry Gibson played Haven Hamilton, an elder statesman of country music patterned on Roy Acuff. Ronee Blakley looked and sang like Loretta Lynn. The black singer portrayed by Timothy Brown more than resembled Charlie Pride.

The movie captured Nashville, country music, and, indeed, America, in a way never seen before on the big screen. Altman went on to other triumphs, but it remained his Big One. Curiously enough, Nashville marked Lily Tomlin’s first appearance in a movie, and Prairie Home Companion, Altman’s last film, also featured Tomlin, this time as part of a sister act singing country music.

This entry was posted on Wednesday, November 22nd, 2006 at 8:12 am and is filed under Shuffled off this mortal coil. You can follow any responses to this entry through the RSS 2.0 feed. You can leave a response, or trackback from your own site.