James Brown, who died on Christmas day, had several Tennessee connections. First, he played across the state–from Memphis to Kingsport–throughout his career. Perhaps the oddest venue for him was in 1979, when he sang on the stage of the Grand Ole Opry. According to an article in today’s Tennessean, the “Godfather of Soul” sang  “Your Cheatin’ Heart,” “Tennessee Waltz,” and “Papa’s Got A Brand New Bag.”

In the early days, his career was one of the many black entertainers boosted by Nashville’s WLAC, a powerful AM station whose most famous disc jockey, John R., aka John Richbourg, played what were then called Rhythm and Blues records. According to the Tennessean, “Starting with his 1956 hit, ‘Please, Please, Please,’ the station and disc jockey John Richbourg gave Brown’s music its first exposure to a national audience, said Don Boner, a writer from Indianapolis who has researched WLAC’s history. 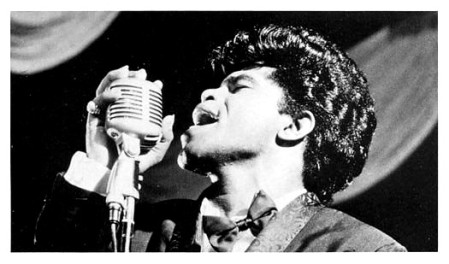 “‘WLAC broke James Brown and introduced him to the nation, just because they had so many listeners,'” Boner said. The station was at its pinnacle when John R. started playing ‘Please, Please, Please,’ he said.”

The Knoxville News Sentinel notes that Brown bought radio station WGYW in 1967 and renamed it WJBE, for James Brown Enterprises.

The article continues: “The station, 1430 AM began broadcasting in 1968, mixing hard-core soul with news updates. It billed itself in ads as “WJBE 1430, Raw Soul, Another James Brown Station.

“WJBE started downtown in the Farragut Hotel before moving to McCalla Avenue in the Five Points neighborhood and then to Prosser Road. While on McCalla, the station featured a large window where passers-by could wave to on-air personalities.”

The only time I ever saw James Brown live was around 1967 when he played Dobyns Bennett High School in Kingsport, a venue that could seat 5,000 people for a basketball game, and probably around 4,000 for this show. I was in high school and the product of a county school system in which for 12 years I never saw a black face. I recall dressing up for the concert. Here we were, an almost all-white audience, and Brown was age 33 and at his peak. He unleashed upon us a show unlike most of us had ever seen: an impossibly tight band, wild dancing, Brown’s trademark screams and growls, and the on-stage theater of Brown feigning fatigue and having to be led offstage, cape draped over a seemingly broken figure bathed in sweat.

He burst back to life, resisting the solicitations of his caregivers, grabbed the microphone, and ended the show on a peak of triumphant funk. That night he gave us every single cent of our money’s worth. Almost 30 years later, having recently been to a Bob Dylan concert where the audience was barely acknowledged and we didn’t even have seats, I fondly remember “the hardest working man in show business.”

James Brown sent us off into the night with ringing ears and the sad knowledge that, as privileged as we were and would ever become, we could never ever be cool.

This entry was posted on Tuesday, December 26th, 2006 at 8:48 am and is filed under Music, Shuffled off this mortal coil. You can follow any responses to this entry through the RSS 2.0 feed. You can leave a response, or trackback from your own site.