One of the perennial delights of the Peabody Hotel in Memphis is the series of Rooftop Parties that take place every Thursday evening from this week through August 30. Beginning at 6:00 PM, they feature live music, drinks, and a great view of the sun setting over the Mississippi River.

The Peabody Hotel’s website gives this history of the Parties: “Originally called Sunset Serenades, Peabody Rooftop Parties began when the Plantation Roof and adjoining Skyway opened in 1938 when the east end of the hotel’s roof was enclosed. The new supper club became a huge success, featuring performances by showbiz greats of the era such as Paul Whiteman, Jan Graber, Tommy Dorsey, Les Brown, Harry James, Smith Ballew and Ted Weens. In the 1940s, The Peabody Rooftop was one of only three locations for live radio broadcasts during the Big Band era.” 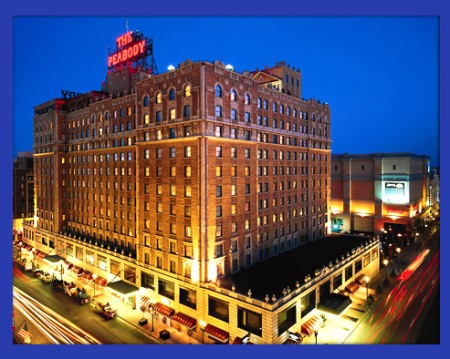