Kurt Vonnegut, who died this week at age 84, received part of his education at the University of Tennessee in Knoxville. Writing in the Tennessee Alumnus Magazine, writer Aaron Purcell describes the program that brought Vonnegut to The Hill in 1943:

“With lower enrollment and nearly empty dormitories, the university easily accommodated such groups as the air corps cadets, who received five months of instruction in English, mathematics, history, geography, physics, and physical education while completing flight training. The Army Specialized Training Program also sent several hundred students to the University of Tennessee, including then-engineering student Kurt Vonnegut. This national program was distributed on college campuses across the country to prepare specialists in engineering, science, mathematics, and foreign languages for wartime demands. During the war, these and other government-sponsored programs educated thousands of soldiers on the Knoxville campus.”

I met Vonnegut once in Massachusetts and found him to be a personable and kind individual. Here is a photo of him as a young man: 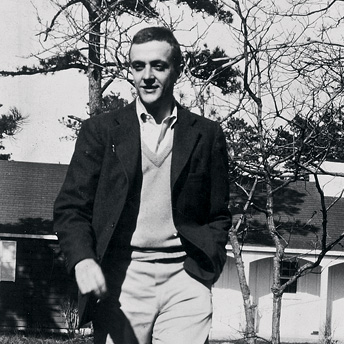 This entry was posted on Friday, April 13th, 2007 at 9:30 pm and is filed under Shuffled off this mortal coil. You can follow any responses to this entry through the RSS 2.0 feed. You can leave a response, or trackback from your own site.

3 Responses to Kurt Vonnegut in Tennessee