While stopping for lunch in Ashland City, I came upon a place of which I have long heard Bob Wills and others sing: Shinbone Alley. It’s a part of “Stay All Night (Stay a Little Longer)” and appears in these lyrics:

“You ought to see my blue-eyed Sally,

She lives a way down on Shinbone Alley,

And the next house over is the grocery store.”

Shinbone Alley was the name of a song by the Spin Doctors on their Pocketful of Kryptonite CD, but was most famously associated with Don Marquis, who created Archy the typing cockroach in the 1920s. Shinbone Alley became the name of an animated film about Archy  and friends in 1971.

Where did Bob Wills get “Shinbone Alley?” Did he read Marquis? Bob would have been 22 when Marquis began publishing his Archy poems, but did they make it to readers in Texas? 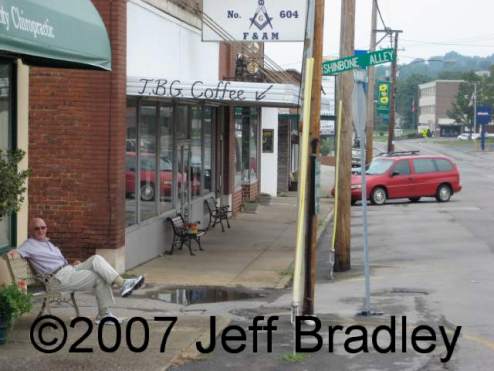 This entry was posted on Tuesday, July 10th, 2007 at 1:49 pm and is filed under Music, Road Trips. You can follow any responses to this entry through the RSS 2.0 feed. You can leave a response, or trackback from your own site.